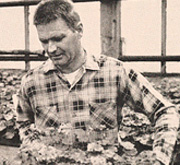 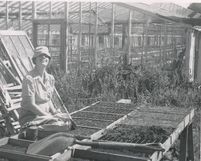 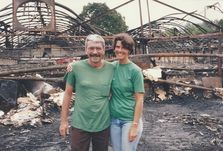 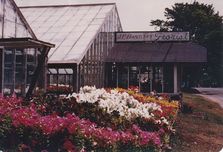 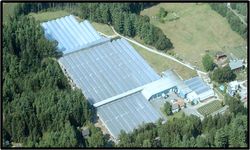 James Lowell Bartlett went to school at Mass-Aggie (now known as Stockbridge of Agriculture at the University of Massachusetts at Amherst) and worked in the weather office of the greenhouses.  During his time there, he had the opportunity to go to the University of Wisconsin to further his education.  After a brief time there, James knew he wanted to come home and start his greenhouse.  A friend of his told him about a broken-down greenhouse in Sudbury described as “a pile of rusted pipe, rotted timbers and broken glass,” which he purchased in 1911.  Thus, moving from Salisbury to Sudbury.  After he fixed up the greenhouses, he noticed other greenhouses in Sudbury were in the carnation business.   So, that is what he was starting to grow as well.

During World War I, there was no coal for the flowers, but there was for food.  So, father Bartlett started growing tomatoes.  James died on October 25, 1943. After his death, his wife Philena leased out the business as all her sons were in the service during World War II.

In 1947, John Pike Bartlett (James Lowell Bartlett’s youngest son) told his mother that he wanted to take back the reins of the company.  A farm boy with a Bachelor of Science in mechanical engineering from Tufts University became known as the “geranium engineer.” Because of his background in engineering, he was able to develop and patented the first plastic-covered greenhouses with Lord and Burnham known as the “Bartlett Structure” that revolutionized the industry.  His passion for improving the business often kept him working till the wee hours of the morning.  Some of those late nights lead to late rising.  However, he knew his greenhouses were in good hands with his wife, Dorothy.

Bartlett’s became known as the “geranium specialist.”  John was once told that he treated the bloodlines of his geraniums the way a cattleman speaks of his cattle.  He was so meticulous of what was produced.  The plant had to have the right stem length, the right amount of buds, no crooked necks and had to provide cuttings for winter propagation.

In the ’70s, John’s health began to fail to the point where he was considering closing or selling the greenhouses.  His daughter Laura approached him and asked if she were to come into the business, would he want to keep it going.  And so, the company continued.  Not only did John get to teach his daughter (from the bottom up), but also his son-in-law Fred who left his family business to work alongside his wife.

Today Laura, with the help of two of Laura’s children, Fred and Beth, continue the geranium legacy.  James Lowell Bartlett would be proud to see that those broken-down greenhouses turned into a fourth-generation business right where it all started.